A few weeks ago I had the rare opportunity to open, decant and taste an iconic French wine from the Chateauneuf-du-Pape region in France. My brother received a gift of a 1990 Chateau de Beaucastel Chateaneuf-du-Pape wine. He wanted everyone in the family to experience a wine that had been stored for over 26 years. This is a wine that should be enjoyed and savoured for its complexity. It’s a complicated mix of grapes like Mourvedre, Grenache, Syrah, Counoise, Cinsault, Vaccarese, Terret Noir, Muscardin, Picpoul, Picardan, Bourboulenc, and Roussanne. All of these grapes combined yield a wine that is both intense and a mosaic of flavours. It’s as complicated as the papal history of Chateauneuf-de-Pape.

If we go back to 1990 when the wine was bottled, Margret Thatcher was the Prime Minister of the UK, Nelson Mandela was released from prison and the U.S. invaded Panama. So a lot has happened in the world since this wine was originally corked. It’s almost a piece of history or a marker in time. Since this bottle had been sitting for a quarter century (hopefully stored correctly) it needed to be decanted properly as there would be substantial sediment in the wine which you definitely don’t want to drink.

This is where the story goes slightly off the rails. Somewhere during the day my brother had sent a text message asking me to bring a decanting set so that we could properly decant the wine. Well, needless to say I failed to notice that I had a text message so when I showed up at the door he asked “Did you bring it?” to which I answered with a puzzle look on my face “Bring what?” “Did you get my text message?” to which I answered while reaching for my cell phone, “What text message?” Rather than drive for 45 minutes back to my house we decided to “MacGyver” a decanting set which consisted of an empty clean wine bottle, a funnel, a strainer, an unbleached coffee filter and a steady hand. The first hurdle was to get the cork out without breaking it into a million pieces. Slowly we inserted the corkscrew and then tried pulling it out like two surgeons removing an engorged gall bladder. Unfortunately, the cork broke half way out and I was forced to go back in several times with the corkscrew. After some grunting and many curse words, it finally came out with a bit of tartaric crystal deposit on the bottom of the cork (see cork picture). 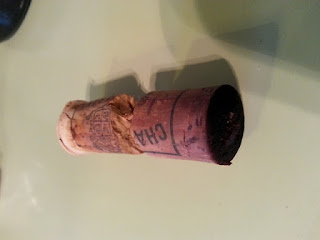 We then assembled the improvised decanting set and started carefully pouring the wine like it was nitroglycerin. There was some minor spillage which was followed by more blasphemy but we managed to decant most of the wine. The bottle had substantial sediment in the bottom (see picture) which didn’t end up in the decanted bottle. A job somewhat well done so we let the wine sit for an hour to breathe before tasting it. 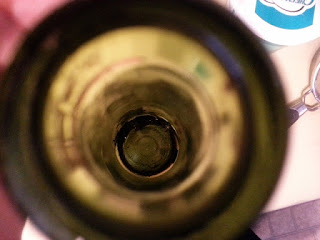 Needless to say it was well worth the wait. After a quarter century the wine had changed from a dark red to a garnet colour with a well defined water line around the edge of the glass. The aroma was distinct and earthy in nature but no sign of spoilage. After taking the first sip we stared at each other for a few seconds with mouths full of 26 year old blended wine expecting someone’s face to go sour but we were pleasantly surprised that the Chateauneuf-du-Pape had a mid to long finish of sour cherry and an almost raisin flavour. As I sat at the dinner table looking at the iconic wine swirl in my glass and savouring the last drops I reflected back on the events of 1990. The music group Milli Vanilli had an almost cult following on the pop charts. Hmmm.. I guess some things age better than others.

If you would like to buy your own piece of history and age it for a quarter century, you can purchase a 2014 Chateau de Beaucastel Chateauneuf-du-Pape at the LCBO for $89.95 (711317) 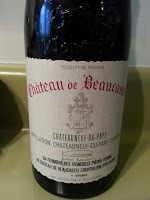 Posted by Mark Uncorked at 3:27 PM