Yes the Ottawa Wine and Food show was a lot of fun and there were some great wines to be tasted but for some people it was not that fun. It left a bitter taste in their mouth like a bad chardonnay.

So lets get to the ugly part and yes there's an ugly part. Ticket sales and accessing the show was not pretty this year and this is not an isolated incident. It happens almost every year that I've gone and dates back to the days when the event was at the Civic Centre. It's an area that needs immediate improvement or people will simply stop going to the show out of sheer frustration. So let me address this part to the people who organize the Ottawa Wine and Food Show.

First. Buying an online ticket for entrance to the Wine and Food Show is not a lottery. You can't just take peoples money and then make them stand outside for 3 hours while you sell walk-up tickets at inflated prices. There's a level of commitment to the consumer when you sell tickets on line and there must be a reasonable time frame for accessing the show. They have committed their money to go to the show so you must commit to providing access to the show. It's that simple. 3 hours outside on Colonel By Drive in November weather is not reasonable.

Second. If your organization cannot guarantee access to the show in a reasonable time frame, the consumer is entitled to a full refund without a fight. You can't just take the money and run. It's not professional, it's not good public relations for future shows and it gives the Ottawa Wine and Food show a bad name.

I've talked to a number of people at the show and some who have stopped going because they refuse to attend another wine and food show where there's a good chance that they will not get in and lose their money.

Like the old saying goes "Fool me once, shame on you. Fool me twice and I'll go some place else to drink wine. (or something like that).

Cheers !
Posted by Mark Uncorked at 10:06 AM No comments:

It was a smorgasbord of wine, beer, whisky and food at the 2012 Ottawa Wine and Food show held at the Ottawa Convention Centre and it was phenomenal once again. I was able to attend one of the wine tastings hosted by Rod Phillips called "Tasting in the Dark" which was both unique and informative. 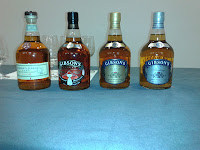 I also had an opportunity to meet with whisky sommelier Davin de Kergommeaux who hosted a Canadian rye whisky tasting. Davin is a certified Malt Maniac, sommelier and Canadian whisky guru. Davin was doing a tasting featuring some of Gibson's finer rye whiskeys. I wasn't able to attend the tasting as it was sold out but I did chat with him (very briefly) about whisky and his new book Canadian Whisky: The Portable Expert 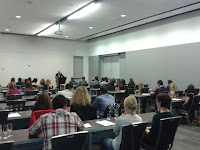 The "Tasting in the Dark" wine tasting was led by Rod Phillips who writes a wine column for the Ottawa Citizen. This was a fun tasting. The room had 60 plus people anxiously waiting for a unique wine tasting experience and they got it. Shortly after Rod's introduction, the lights were turned out and with a few whimpers from the people with Nyctophobia, the sommelier volunteers started serving the wine using night vision goggles. Yes that's right.. night vision goggles. There were a couple of "excuse me" and "sorry" as the volunteers got used to moving around the room using their new form of artificial sight but after 15 minutes with no glasses broken everyone had a glass of wine in hand. The first challenge was to figure out if you were drinking red or white wine. Once you reasoned that out, the next task was to identify the varietal which proved to be the interesting part as people started yelling out wines that in some cases were both red,  white and rose.
Out of the 4 wines served, the Sauvignon Blanc from New Zealand and the French Beaujolais seemed to be the easy guesses as a lot of people were on the same track with those wines. The lights were eventually turned on and Rod revealed the answers to everyone. Like I said, a lot of fun.

After the tasting I headed up to the main show floor to scout out some good wines. The Zinfandels from California (Ravenswood Old Vine, Gnarly Head and Fancis Ford Coppola) were all excellent as usual. Big and bold.

I did find a few of gems that I thought stood out on their own.

2011 Stanners Cabernet Franc. 100% Cabernet Franc barrel aged in French oak. The usual heavy herbecious aroma of green peppers was not as strong which made this wine more enjoyable. A good balance between fruit and acidity. Very pleasant. Sorry. I didn't get a chance to take a picture of the bottle but here's their website http://www.stannersvineyard.ca/ 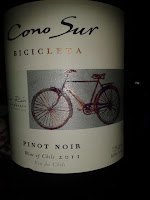 2011 Cono Sur Bicileta Pinot Noir was smooth, subtle and layered. A great sipping wine or it could be paired with pork tenderloin. 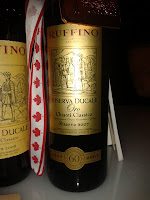 2007 Ruffino Riserva Ducale "Oro" Chianti Classico was everything a Chianti should be. The barrel aged Sangiovese was smooth and elegant. Loved this wine


Cheers !
Posted by Mark Uncorked at 4:06 PM No comments:

I used to think that scotch whisky drinkers were a bunch of old men sitting around in big leather chairs smoking cigars, sipping scotch out of expensive crystal glasses, chortling over bad jokes and talking about the stock market. Lately, I've noticed that drinking scotch has become much more mainstream. A younger crowd is diving into the scotch whisky market with enthusiasm and they're not drinking their father's scotch. They are looking for a better scotch and have done their homework on the Scottish distilled malted barley business. 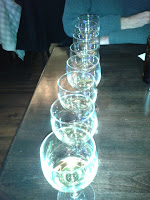 One of the easiest ways one can start learning about whiskies or increase their knowledge about scotch whisky is to attend a whisky tasting like I recently did in the lovely village of Carp at a local cafe called Alice's. One of my fellow somellier's, Dustin was hosting a scotch whisky tasting at the cafe.
The best part of attending a whisky tasting is that you get to sample a good selection of whiskies without having to max out your credit card at the LCBO. Only to discover that you only like one or two of the whiskies and the rest of the bottles sit in the back of your cupboard with those extra Thanksgiving napkins with the cartoon turkeys on them. 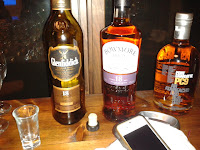 So Dustin's plan was to start us off with a mild 17 year old single malt scotch called Glencoyne which is made just north of Glasgow. It has a relatively low peat content so our tastebuds would not be overwhelmed with the first glass. The whisky is aged in sherry casks and some of that sweet sherry comes to life when a touch of water is added.

The next scotch was an 18 year old single malt from the famous Glenfiddich distillery in the heart of the Highlands. Smooth and layered with a slight sweetness and spice from the Oloroso sherry casks that the whisky has been aged in. 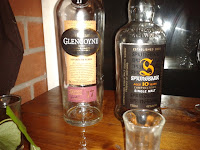 We moved on to a 10 year old single malt called Springbank which is from the Campbeltown area. A nice little scotch with a hint of peat at the end.
From there we tried a Taliskers scotch  from the Island region which is on the west coast of Scotland. I found this scotch to be a little sharp on it's own and it seemed to have better flavour with a touch of water. 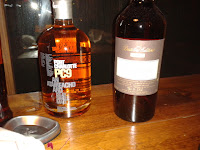 We ended the night with 2 scotchs and an incredible little dessert called bacon shortbread cookie with chocolate drizzle. Yes, that's right ... bacon. At first  it sounded like a weird baking accident but that little cookie was so good it had everyone asking for seconds.
The Bowmore 18 year old single malt from Islay definitely had some peat going on but it had a really nice caramel flavour to it.
The final scotch was a 9 year old single malt called Port Charlotte PC9 from Islay. If you like that peat flavour in your scotch this is the whisky for you. One person aptly described the initial taste as "crunchy".

Not bad for an evening of laughter, discussion and I increased my knowledge about Scotland and scotch. I tried six whiskies for a decent price and now I know which one I will buy the next time I have friends over.

Posted by Mark Uncorked at 9:42 PM No comments: