I don't normally don't post reviews on beer but I was particularly interested in the National Capital Craft Beer Festival because it's about a surging niche beer market that is getting a firm foothold within an industry that has been long dominated by a handful of big beer companies...... and also I like beer.
In these days of slick advertising, fancy packaging and catchy jingles, it's nice to talk to people who are more interested in the content of their product rather than colour changing cans, huge advertising campaigns or tea and fruit infused beers. I went to the festival with one objective in mind. I wanted to try some unique beers created by individuals who have a real passion for their craft and to talk to them about how they make these unique tasting beers.
With beer cup in hand, a sheet full of beer tickets and a feeling of being slightly parched, I started my quest around the venue searching for some special beers to quench my thirst.
First of all, kudos to the organizers of the craft beer festival. They had setup the venue so that all of the beer and food tents were around the perimeter of the park with picnic tables in the centre so if you wanted to stop and take a break or have some food you weren't clogging up the areas in front of the tents. It made navigating all of the beer and food areas easy and organized. Well done ! 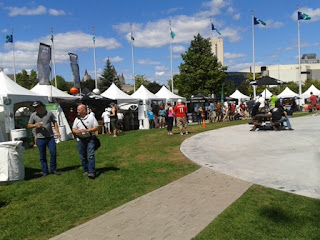 My first stop was at Broadhead Brewing Company (www.broadheadbeer.com) which is located on Auriga Drive in Nepean. Their business has been growing so well that they have had to expand operations into a larger footprint to accommodate more equipment. Business is obviously good. I tried their Longshot White Wheat Ale which was very nice. Some cloudiness and a subtle spice with a refreshing citrus crispness to it. A nice start to the day. 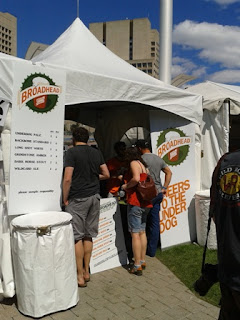 That beer went down fast so it was time to move on to the next tent reminding myself to "stop and enjoy" each beer rather than throwing it back like a teenager at his prom. The next tent was Beaus All Natural Brewing Company (www.beaus.ca/) which is located on Terry Fox Drive in Vankleek Hill, Ontario. I was intrigued by there Weiss O'Lantern Pumpkinweiss white ale which turned out to be an excellent choice. The Pumpkinweiss had an nice orange hue with a smooth creamy finish and it tasted like pumpkin, cloves and citrus. Excellent ! 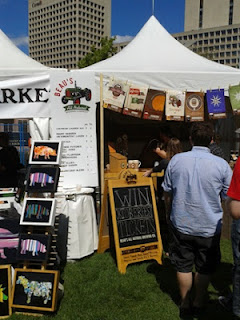 I took a break to enjoy some live music in the main tent and then shuffled over to the Hogsback Brewing Company (hogsback.ca) which is located here in Ottawa. I decided to stick with the wheat ales so I sampled their Sunofa Beach Kristal Wheat beer. A bright clear and crisp beer with some citrus flavours and not too hoppy on the finish. All in all a very good beer. 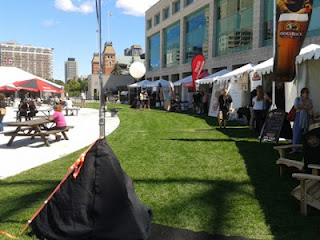 Other stops along the way included the Flying Monkeys with their mildly hoppy wheat beer called Stereovision, Muskoka Breweries which had a great cream ale and the Clocktower Pub was pouring a nice smooth Blonde beer with some mild hoppiness to it. Alas, I was down to my last beer tickets so I ventured over to the Ashton Brewing Company (ashtonbrewpub.ca/) to sample their Ashton Cream ale which lived up to it's name. A bright golden colour with a smooth and not too hoppy creamy finish. A nice way to end the National Capital Craft Beer Festival.

I fully plan on attending next years festival but I'm definitely bringing some friends along to enjoy the food, music, sunshine and of course the beer.


Posted by Mark Uncorked at 1:20 PM No comments:

I've always wanted to do this style of wine tasting since I began my pursuit of being a Sommelier and I honestly admit that I have a wee-bit of wine envy for the Bordeaux producers from France. They get to blend the great noble grapes of the Bordeaux region into a classic vintage with it's distinctive aromas and flavours. Imagine sitting at a table full of bottles containing Cabernet Sauvignon, Merlot, Cabernet Franc (plus possibly others) and blending them together in endless combinations searching for that magical Bordeaux formula that sets your chateau apart from everyone else. What a life !!
My "Build your own Bordeaux" wine tasting featured both a red and white Bordeaux styles using red wines from Ontario and white wines from Australia. Each participant was given a sheet with the percentages of wine to be put into each type of Bordeaux. The red wines featured Cabernet Sauvignon, Cabernet Franc and Merlot from Pelee Island Ontario which is on a similar geographic latitude to the Bordeaux region in France. Each person was given a mixing formula for a Classic or Chateau Bordeaux, a right bank Bordeaux and a left bank Bordeaux along with a tasting glass and three 1 ounce cups to measure the wine portions. For the white Bordeaux, a Semillon and a Sauvignon Blanc from Australia was used to create their personally blended white Bordeaux. I encouraged everyone to assess the aromas and flavours of each wine before blending them together. After blending the wines together, did they like it ? If they didn't, try adding more of what you like to see how much it changes. It's amazing to see how a small amount of Cabernet Franc can really change the flavour of a Bordeaux. A word of advice, use dinner plates under the tasting glass as some people are a little messy when it comes to pouring. It's a real hands on, chemistry type of wine tasting but it's lots of fun.

Here's some examples of the formulas we used to make Bordeaux blends. Since there are no Bordeaux police and the chateaus use their own mix of the essential grapes that make up their Bordeaux, you are free to let your imagination run wild !

Cheers !
Posted by Mark Uncorked at 11:57 AM No comments: