Whether it is wines aged in bourbon barrels, beer stored in bourbon barrels, Irish whiskey aged in bourbon barrels or the Jim Beam warehouse fire that saw 45000 barrels of bourbon go up in a gigantic Kentucky bonfire, mash whiskey is in the news. Everything seems to be aged in bourbon barrels these days. Producers of beers, whiskey and red wine are starting to see the benefits of ageing their product in bourbon barrels to extract new flavours and of course some alcohol.
Why bourbon and not wine barrels you ask? First you need to understand the difference between a wine barrel and a bourbon barrel. Both are made from oak but bourbon barrels are charred on the inside to act as a charcoal filter to remove some of the harshness from the whiskey. Wine barrels on the other hand are toasted to enhance the flavour of the wine. Once the bourbon liquor is removed from the barrel after the bottling process, there are some residual aromas and flavours remaining in the barrel. Storing wine or beer in a bourbon barrel for a year allows caramel and vanilla flavours to interact and blend with the beer or wine.
Jameson whiskey which is traditionally stored in sherry barrels (that’s a topic for another day) is now offering whiskey stored in bourbon barrels. The whiskey is called Jameson Black Barrel and offers enhanced flavours of vanilla and nut. These are exciting times for vintners as they explore the interaction between grapes, tannins, yeast and acidity with bourbon barrel aging while brewers play with grains, hops and yeast. Consumers on the other hand are reaping the benefits of this endeavor. The notion of producing the same product over and over again is being displaced by vintners, brewers and distillers willing to experiment and inspire us with new ideas. 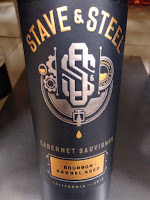 It’s a dark rich Cabernet Sauvignon that’s almost opaque with lots of dark fruit like cherry and plum with some caramel flavour at the end. There’s no increase in alcohol from the bourbon barrels but it definitely adds character to this wine. A great compliment for BBQ steak or ribs.

Available in the Carleton Place and Stittsville LCBO 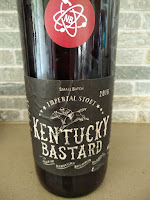 Not exactly a light beer but it is delicious. This imperial stout is rich and thick with flavours of coffee and chocolate. The Bolshevik style stout was stored in bourbon barrels for a year so it has picked up some vanilla flavour and alcohol as well. A stout like this is pretty strong so watch out as this one has an ABV of 11.9% which makes it roughly twice as strong as most craft beers. I chose to pour samplers for all my friends so that they could try a classic imperial stout.